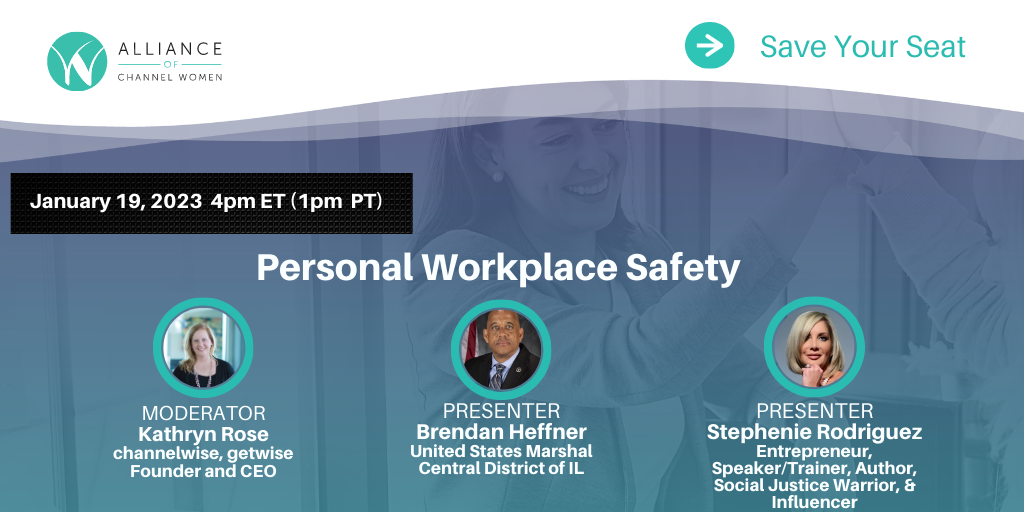 One of the most common concerns women in our industry have — particularly first-time conference goers, solo travelers or traveling in general — is staying safe on the road.

That’s why we’ve gathered helpful tips, tricks, recommendations from experts, and resources to help you travel more safely. Arm yourself with the tools and knowledge you need to be better prepared so you’ll feel ready to handle whatever situations you may run into.

The panel will be moderated by Kathryn Rose, CEO of channelwise, an ACW partner.

Marshal Heffner began his law enforcement career in 1985 as a patrol officer at the Normal, Illinois Police Department. In 1989, he became an Illinois State Trooper, serving in that agency for 21 years in various capacities, including general criminal investigator, internal investigations, labor relations, counterterrorism and drug interdiction. He supervised a multi-jurisdictional narcotics task force and became an Academy Commander.

He retired from the Illinois State Police in 2010 as a Lieutenant Colonel. Marshal Heffner went on to work at State Farm Insurance Company as a Safety/Security Specialist and instructor with Illinois Law Enforcement Alarm System (ILEAS). In 2013, he was selected as the Chief of Police in Bloomington, Illinois, where he served until his selection as United States Marshal for the Central District of Illinois.

Stephenie Rodriguez is a startup founder and serial digital entrepreneur. She founded ‘lifestyle’ media in Australia in 2001, importing and becoming the publisher of Ocean Drive Australia magazine.

She transitioned to digital publishing, creating works for global brands, including Pirelli Tyres and Oakwood Hotels.

In 2004, she founded MightyMedia Group and led the social media and digital transformation aspects of marketing in the travel sector.

In 2016, she pivoted to address the problem of personal safety for women and vulnerable people and founded JOZU for Women Inc.

Rodriguez is on a mission to impact a billion lives by 2025 and democratize safety in support of the United Nations Sustainable Development Goals.

The free WanderSafe app is issued in more than 58 countries currently.