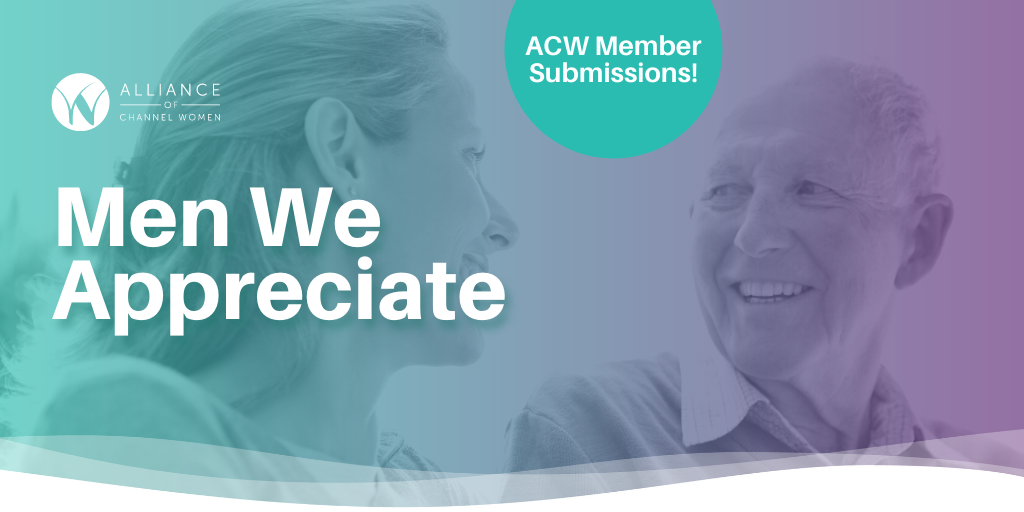 As a community of women, our ACW members champion each other’s success as professionals and friends. But there are those men that have made a difference in the careers and lives of our members. November was Men’s Health Month, and we asked the ACW community to tell us about someone they appreciate. Here are their submissions:

My father has always been someone I have looked up to my whole life. I remember writing about him when I was in elementary school talking about heroes, and I have been beyond lucky to continue to call him the same today. Even as an adult, with moving into my first home with my husband and giving me away at my wedding recently, he is always looking out for me and asking ‘Who’s the best?’ and my siblings and I respond, ‘I’m the best.’ My father and his father (my Pepe) always helped guide me through my career with advice and perspectives. That was just a tiny piece in the large picture of my life that I appreciate.

My spouse, Darrin Johnson, has long been a huge proponent of women in technology.  He was raised by a single mother who had a professional career as Registered Nurse at the Mayo Clinics in Rochester, Minn., and Scottsdale, Ariz.  He appreciates first-hand the plights women can endure during their careers and the barriers that can sometimes be put in front of them to get to the next level.

As a hiring director for his team, Darrin always looks for interns and engineers who want to innovate and bring insights to new technologies that can be leveraged in HPC and AI.  Darrin welcomes new ideas and encourages his team, women and men alike, to continue to develop their leadership skills.

In his role as Global Director of Technical Marketing and Solutions Architecture for Enterprise at NVIDIA, Darrin has been highly praised by his upper management for creating a culture of learning for interns and developing future leaders at NVIDIA. Just this year, Darrin hired three women interns for his team. Darrin welcomes mentoring others, especially providing a safe space for women in technology.

It’s so impressive to see a director/manager and leader growing and developing his team and investing in helping others succeed in their roles.  Darrin only asks that his staff pay it forward to others in the same way.

Jeff introduced me to industry leaders who became business partners as well as friends. He also encouraged me to join as much as I could–councils, advisory boards, panels and more. I did, and I got back tenfold what I put in. Jeff advised me to speak as a subject-matter expert in front of 10, 20, 100-plus people; this helped me overcome a horrible fear of public speaking. (This is still a work in progress, but I’m grateful for his advice!) He convinced me to finally believe that I was supposed to be “at the table” and that I had worked hard and earned my leadership role. Jeff is always, always in my corner, cheering me on.

Dustin Wilz (Director of Channel Sales at MetroNet) took me on as his assistant in June of 2020.  I had worked for the company for a little over four years at that time, but he had not worked with me personally before. The most significant shift in my career happened when Dustin took a chance on me – that back-office girl coming into a people-facing sales role.  I feel that Dustin saved me–mentally, emotionally, career-wise. He truly made my home and work life something I am proud of today.

For an entire year before my promotion to my current position as Channel Manager, Dustin taught me everything I now know about The Channel and so much more. He is my supervisor, but he quickly became my mentor and someone I look up to and respect greatly. He has a vast knowledge of the telecom industry from his many years of experience. He took the opportunity that whole year to teach and guide me every day, even though I was only his assistant at the time. I value that time in my life greatly to this day and always will.

He literally took me under his wing, as cliché as that sounds, and we became an unstoppable duo that grew our Channel 224% that year. He included me in calls and meetings and let me learn as much as possible, whenever possible. He taught me more in-depth about telecom in general, services, equipment, and more that I had not had exposure to in previous positions at my company. He also taught me the lingo, the acronyms, and that not all companies use the same language that our company does. He would often put on his engineering hat and teach me how to read engineering information more proficiently, what to look for, and when to ask more questions if needed.

Dustin helped me find my voice not only within my company but also personally. I have never had someone believe in me and my abilities the way Dustin did and still does to this day. I was promoted to Channel Manager in June of 2021, and our team has grown from two to five, but he still makes the time to motivate, teach, and help me realize my full potential every chance he gets. Dustin Wilz defines a true leader, mentor, and friend. Without his guidance, infectious energy, and passion for telecom, I do not think I would be the Channel Manager I am today. I honestly can never repay him for everything he has taught me and for all of the support that he has provided.

He doesn’t get enough credit for being my hype-man and changing my life in the best possible way!