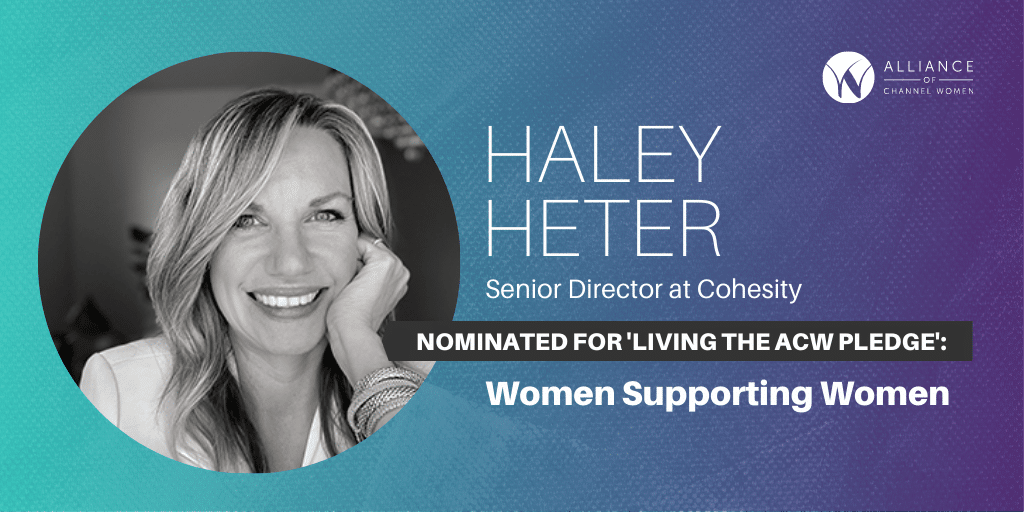 In what way(s) is your nominee an example of Living the ACW Pledge of women supporting women?
Haley is an entrepreneur with several different businesses plus a very demanding career. She sets an incredible standard for her daughter as well as her sons. Even though she has a full-time position with a high-tech company, she also manages rental properties and Airbnb’s. Then, she decided to open a tea house. While obviously, this is open to all, it targets women with a selection of teas and gifts plus an environment for connecting with friends. Specials include live music and delivering an atmosphere that uniquely supports the needs of women.

What is a specific example of what she did for you and when it happened?
Haley was my employee in the early 2000s, and she said I helped her break into the high-tech industry back then. Men dominate this industry. She was very successful and went on to earn several promotions at that company staying there for 17 years. I moved to four other companies during that time. Then she seized an opportunity to work for a start-up in January of this year and lead the launch of Cohesity Academy. Within three months, she contacted me about working for her and encouraged me to apply for one of her open positions. While I went through a rigorous hiring process, I know that she was my champion, which helped me through the whole process.

What impact did her action have on you and/or your career?
Her action completely changed the trajectory of my career. While I had been in Director level positions at previous companies, the last position I took was an independent contributor for one of the largest technology companies in the world. It was an excellent opportunity to learn some new technology, but ultimately it completely stalled my career. This opportunity changed everything for me. Not only is it an opportunity to make a real difference and build entire programs from scratch, but it is in a high-tech, fast-paced environment that demands the engagement of only the very best professionals. Haley is the epitome of just such a professional, and as a result, she impacts many other women’s careers.

Want to Nominate a Woman Who is Living the ACW Pledge?
Do you know a woman who has played a supportive role in your technology career, please tell us who she is and how she had your back!