Friendship, Equality & Sisterhood – What Do They Really Mean? 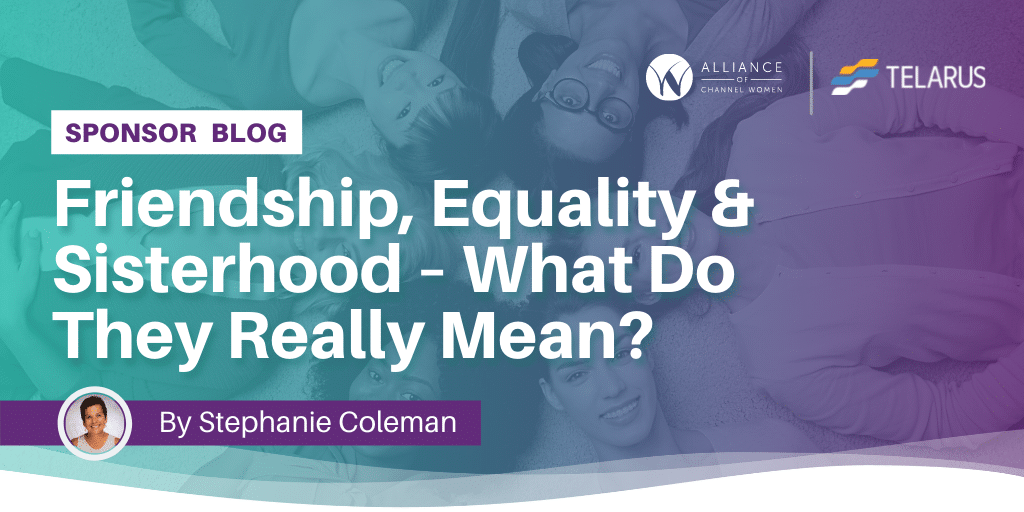 When I was asked to write a blog that would touch on “Friendship, Women’s Equality and National Sisters Day”, I started thinking about what each of those words meant. Friendship, equality and sisterhood. So, I decided to look each of them up in the dictionary.

We all know the emotional part of friendship, but what about the conduct part? Our actions have a huge impact on our friendships with women. We need to make sure that we are showing friendship. No, I’m not talking about hugging or going to lunch. I’m talking about showing respect for one another. Stop with the negative labels like “mean girl,” “bulldog,” “bitch,” “aggressive,” “ball buster,” etc. Let’s start using positive labels like “Inspiring,” “authentic,” “driven,” “collaborative,” “innovative,” “creative,” “honest,” “reliable,” etc.

We need to champion one another. Success is not something to be envied; it’s something to be celebrated. We need to recognize each other’s hard work and sing each other’s praises. When we react to someone’s success negatively, we further the stereotype that women are petty and spiteful, and you diminish the accomplishment and the work that went into the achievement. We need to ask ourselves, what is our conduct as a friend?

My mom was recently diagnosed with brain cancer, and prior to her diagnosis, a few of the women I work with planned a wonderful trip to Jackson Hole, Wyoming. It was going to be four days of fun! However, after finding out about my mom, I didn’t want to go. But they encouraged me to go, and I am forever grateful they did.

The emotions I was feeling about possibly losing my mom and the stress of my job were all bottled up inside of me. They knew that I was at my breaking point before I did. They knew I needed my friends.

We had a great time at the cabin, playing games, laughing and crying. That trip meant more to me than they will ever know; it recharged me. They were there to support me and tell me that I was not facing the battle alone. I didn’t know any of these women before I started at Telarus, and the strong bonds that we have created is one of the reasons I call Telarus home.

When I was growing up, my mom always told me to “act like a lady.” What did that mean? I was never a girly girl. I was the only girl in a neighborhood of nine boys, and I grew up playing football and baseball. I only owned one Barbie, and I let the boys rip her head off to put a firecracker in it. I was not a “lady.”

I got along great with the boys, but I struggled to make friends with girls. I hated wearing dresses, and I didn’t want to play Barbies. I wanted to play football, baseball and ride my bike to the river and catch fish. I thought I was one of the boys! There was nothing they did that I couldn’t do.

That all changed when I was 14 and my brother was 13. We both played in the same Babe Ruth league. I made All-Stars, and he didn’t. I don’t know if my dad was angry or embarrassed, but he pulled me out of Babe Ruth and enrolled me in the girl’s Bonnet Ball league the following year. I was so hurt. At the time, I didn’t know what I did wrong, and my dad never said anything. I was being punished because I was better than my brother, a boy.

That was my first experience with equality and inequality. My dad’s decision to pull me out of Babe Ruth made me feel like I was as good as a boy yet I could not be part of that world. I was crushed.

Fast forward 39 years and women have made great strides towards equality. This year, in the Summer Olympics, the United States won 39 Gold medals; 23 of them were won by women. Of the 113 total medals won, 66 of them were by women. This gives me hope that no girl in America will be told they don’t have the same opportunities and can be as successful as a boy. All doors should be opened.

Board Room doors are opening too. The number of women running Fortune 500 companies has hit a record of 41, but it’s still only 8.2 percent.

How do we gain equality and make sure that future generations are given the same opportunities as men? A start is to have more female representation in management roles. We need to have a voice at the table. Apply for the open positions, even if they take you out of your comfort zone.

Where do you want to be next year? In the next five years?  Know your worth and be your advocate. Communicate to your manager your goals and then create a plan to achieve them. Don’t let anyone else chart your course.

When you are given an opportunity for advancement, reach out to your network of women who have experience that can help guide and mentor you as you make that position your own. They can be your biggest champions. Don’t stay silent. If you have an idea, share it. If you see a process that can be improved, implement it. Don’t sit on the sidelines. Jump into the game!

I have five older sisters, so I understand the bond that sisters have. But I have learned that you don’t have to be related by blood to have the strong bond of sisterhood. As I mentioned before, there are women within our industry that are my sisters. They are my champions. They lift me up when I am down and are brutally honest with me when I mess up. I appreciate and value their opinions, and they are some of the first people I go to when I need guidance.

We work in an industry that is fast-paced and constantly changing. We understand the struggle of long hours and time away from our families. We need to balance the demands of our careers with the demands of family. We understand the unique challenges of working in an industry that is still predominately male. We need to make sure that we are working together, sharing our experiences and having each other’s back.

I will challenge each of you to step out of your comfort zone and reach out to someone you have always wanted to get to know and open your circle so that you can learn from one another. Together, women are powerful!

About the Author
Stephanie Coleman is the Director of Project Engineering at Telarus. She can be reached on LinkedIn and invites ACW Members to connect. “I look forward to getting to know you and learning from you!”