Eyeing the C-Suite? Two Questions to Ask Yourself 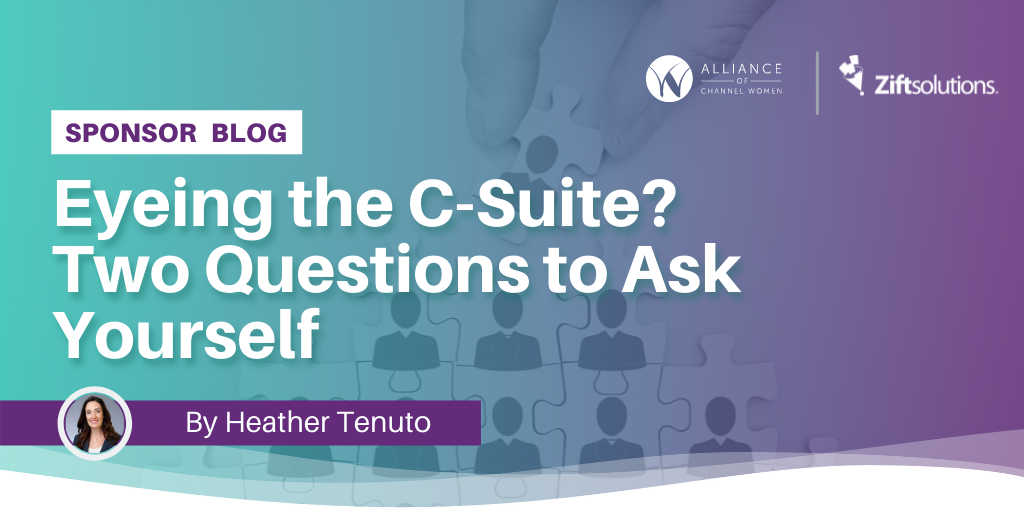 One day, my fourth-grade teacher asked the class to write an essay about what we wanted to be when we grew up. She hung a poster that listed careers to give us some ideas. As she wandered around the room, she noticed that every one of the girls had chosen either a nurse or a teacher, which are the most difficult of professions, but also the only ones with pictures of women on the poster. My teacher ripped up the poster and made us all pick something else. “Women can be anything!” she said. “Well, if that’s the case,” I thought, “then why not go straight to the top?”

I titled my essay: Heather Tenuto, President of the United States of America.

Is the C-Suite for You?

I would be a terrible POTUS. They don’t seem to get much sleep and the pay isn’t that great. I would hate that job. As it turns out, just “getting to the top” isn’t a good enough reason to want to be a CXO, either.

Being a leader at the top of an organization requires very different skills than the roles within it. I’ve always been a great problem solver. Give me a problem, the messier the better, and I will work my tail off to resolve it with grit and elbow grease. These skills are useless as a CRO.  There are too many challenges to be solved, even for me. My job is not Head Problem-Solver but Head People-Developer; very different and not for everyone. Before you target the leadership role, make sure it’s something you are equipped for and happy to do.

Are You Ready for More Feedback?

We all say we’re “open to feedback” because it’s what we’re supposed to say… but is it true? Early in my leadership journey, I recognized that receiving negative feedback affected me physiologically. It changed my mood, others noticed, and in turn, they stopped giving me feedback. Being open to feedback means being able to listen to what others say, refraining from reacting, deciding what to accept, and then making a change for the better.

I once shared my resume with a colleague I had previously worked with and asked for his feedback. He told me that a C-level position was too much of a reach for me and that I should focus on Human Resources instead of Sales. In the past, that kind of critique would have decimated me, but I had since learned that it’s okay to reject feedback. This person hadn’t worked with me for long and hadn’t seen me in a Sales position. I was thankful for his candor, but I didn’t change course, and soon landed the role I was after.

Once I got more comfortable with feedback, I found people I trusted and asked them for very specific advice. And because I didn’t react negatively, they were happy to give it.

Aiming for the C-Suite? Above All Else, Know Thyself

I once asked my boss, “What weaknesses do you see that will hold me back from becoming a CRO in two to four years?” My boss’s answer gave me a game plan. I had gaps, I found ways to fill them and I was then able to achieve my goal. And there was more feedback waiting for me once I got there. Board meetings are feedback Thunderdomes. Get ready.

Understanding what’s required of the job you want and uncovering and filling the gaps in your own experience is the surefire formula for success at any level. It’s worked for me so far. I’ll use them again when I am ready for my next role–which to the disappointment of my fourth-grade self, still won’t be President of the United States. I’ll leave that job to the professionals.

Throughout her career, Heather has helped tech companies accelerate revenue through both direct sales and channel partnerships. Her two passions come together in her role as Chief Revenue Officer at Zift, where her mission is to help companies achieve real channel success. Previously, Heather served as VP of SMB Sales and Indirect Channels at Office Depot, and Vice President of Channels at ShoreTel. Prior to ShoreTel’s acquisition of M5 Networks in 2012, she spent five years at the SaaS start-up in several roles leading sales and marketing efforts. Before that, Heather brought her innovative sales and education experience to businesses in many industries including technology, manufacturing, retail, agriculture, and healthcare in both enablement and direct sales roles.