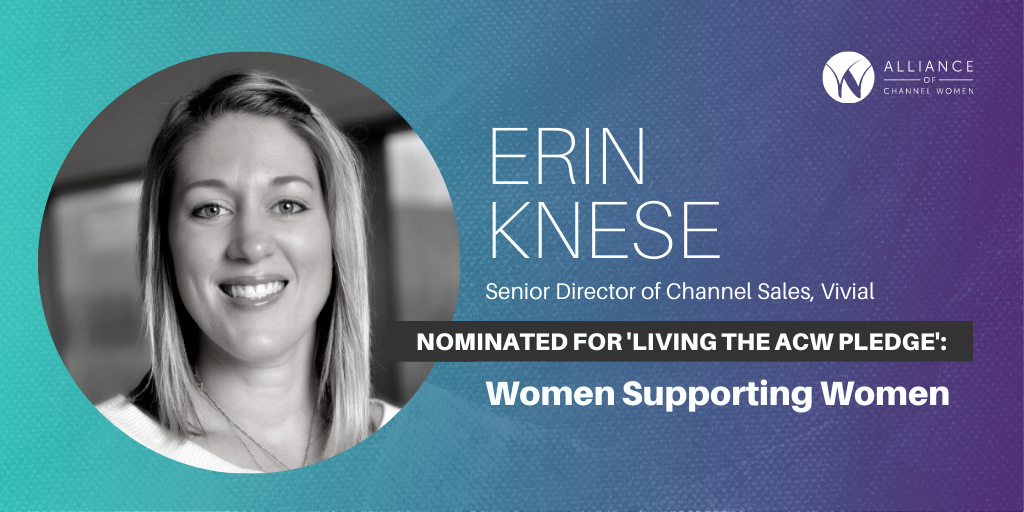 In what way(s) is your nominee an example of Living the ACW Pledge of women supporting women?

Erin trained me in my original role with our company. She’s been a mentor and advocate of any position I wanted to move into during my time with Vivial. She has not only advocated for me but has offered unwavering support and advice along the way. She ﬁnds a way to manage me and gives me the freedom to do my job in the way that works for me – even when it means being creative or getting a little outside the box. She offers prompt, poignant feedback that has helped me grow and develop in each of the roles I’ve held during my time at Vivial and still manages to support the rest of her team. Her transparent, straightforward leadership style has helped me hone my skills as well. She is a superwoman.

What is a specific example of what she did for you and when it happened?

I wanted to move to California in 2017. We did not have a branch anywhere near where I was moving (the closest location is in LA), and we had never had a remote trainer before. Upper management was not keen on having a virtual trainer (since the role is typically more hands-on), but it was something I was conﬁdent I could do. Erin not only backed me up 100% but recommended me to continue in a virtual capacity and fully endorsed the move. It was a success, and that was largely because of her support and conﬁdence in me.

What impact did her action have on you and/or your career?

Moving to California opened up the opportunity for me to not only hone my skills but prepped me to pivot into the new role I now hold as a Regional Channel Manager. Erin moved into a Channel Director role and invited me to join her team. This has expanded not only my skill set but also my network and career growth potential. Erin’s support and mentorship have helped me at work and in my personal life. I admire her tenacity and leadership and view her as a role model.

Want to Nominate a Woman Who is Living the ACW Pledge?

Do you know a woman who has played a supportive role in your technology career, please tell us who she is and how she had your back!