Breast Cancer Awareness: This Month and Every Month 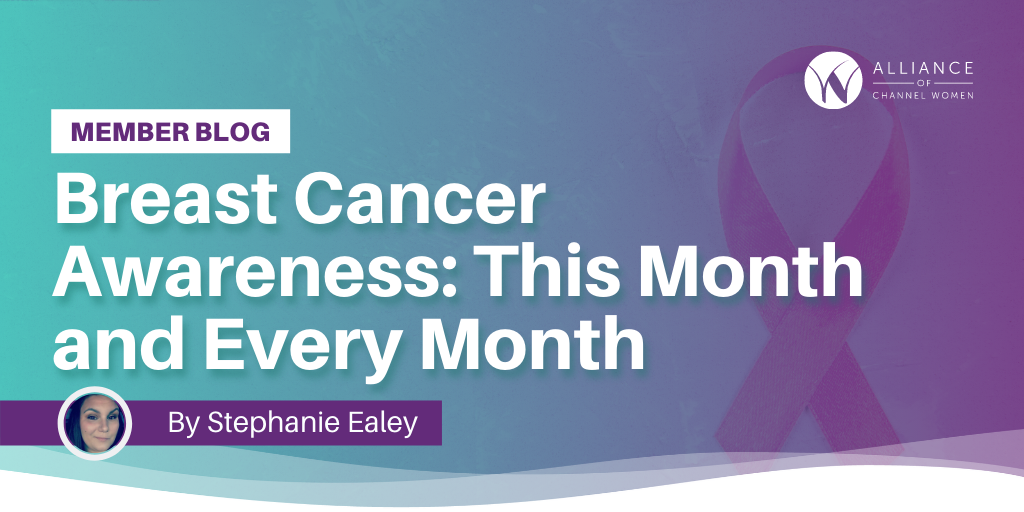 When I was asked to write about breast cancer awareness month, I was torn. Of course, I eagerly accepted but wondered if I should make it more factual or related to my experience as a daughter of a survivor. So, with my mother’s permission, I wanted to include a bit of both.

This year, roughly 350,000 women will be diagnosed with some form of breast cancer. In 2008, my mother was one of those numbers.

I should mention that she is technically my “step” mother, but anyone who knows us knows there’s no step about it. I still remember the pain in her voice when she told me that this was the only time she was thankful that we – my sister and me – were not biologically hers. She didn’t want to have to worry that she passed it on to us. Though the intentions behind the statement were pure, it still hurt to hear because I never thought of myself as anything other than her daughter.

We watched her go through treatment, never once feeling sorry for herself or defeated, even after surgery. I remember thinking to myself how lucky I was to have such a warrior for a mother. Then, we got the call we had all prayed for. She was in remission! The next few years were full of medicines and hospital visits to make sure she stayed that way.

That was until 2011. It had come back. Again, this woman, who battled for her life just three short years prior, was ready to fight. And fight she did. And again, she beat it. Ten years later, she is cancer-free!

Of course, this is not always the case. In 2021, 43,600 women will die from breast cancer in the United States alone. Although rare, an estimated 500 men will also die from the disease.

Though we do not know the exact cause of breast cancer, it is known that it begins as cells that have some damage to their DNA. The body either doesn’t need them, or old cells do not die as they should. This creates a buildup of cells, which generate the mass we’ve come to know as cancer. Risk factors, such as genetics, environmental influences and lifestyle choices, play a role in your chances of getting breast cancer, though nothing can be predicted 100 percent. We are fortunate that we live in an age where breast cancer is no longer a death sentence. There are many treatment options to fight it. Chemotherapy, radiation, hormone therapy and surgery are all options commonly used, each with its own side effects.

Early detection is key in having the best treatment options. Know your body. That way, changes in your breasts are noticed. This means you have to do your self-breast exams at least once a month. In the shower, in front of a mirror or lying down are great ways to perform a self-exam.

Mammograms are also useful in detecting breast cancer. Women over age 40 should have these done at least every year or two. I’ve had one before, and I know an annual mammogram is in my future once I turn 40! It’s true, they are not pleasant – and I swear it’s a rule that whoever is positioning you in the machine must give their hands an ice bath beforehand. Why are they always so cold??!! But, all things considered, it’s no big deal.

Early detection survival rates can be as high as 100 percent. So please, do your exams with a doctor, partner or yourself. It just might save your life.

For tips on how to do a self-breast exam, visit https://www.breastcancer.org/symptoms/testing/types/self_exam.

Author BIO
Stephanie Ealey is the Director of Partner Support EMEA for Telarus. When she is not working, she enjoys cooking and trying out new recipes for her husband and friends. She also enjoys hiking in the mountains of Utah with her two dogs, Mack and Remi.