ACW is the ‘Single Best Investment’ in Myself & My Career 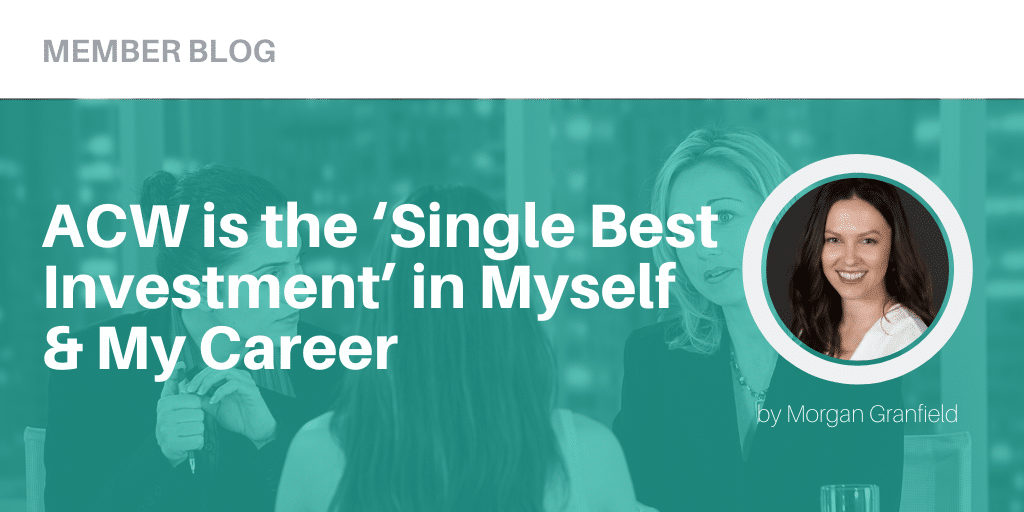 Over the last five years, I’ve had the immense pleasure of volunteering my time and talent on several Alliance of Channel Women committees. That, in addition to co-chairing the Communications Committee for a couple of those years. It’s incredibly gratifying to be a part of ACW – not just as a member, but as a contributing member. I think Jim Rohn said it best: “Only by giving are you able to receive more than you already have.”

For every single ounce of effort that I’ve poured into this organization, I’ve received it back tenfold. As I think back, I can remember a handful of very distinct ways in which I have quite literally reaped what I sowed.

I originally joined ACW just before I attended my very first Channel Partners Expo in Las Vegas. I learned about ACWConnect Live!, a party held for women in my industry the night before the Expo. I jumped at the opportunity to meet other women in our male-dominated industry, so I said, “Sign me up!” I’ll always remember my onboarding call with Helene Kidary, who urged me to join a committee. I’m so grateful that my younger self took her suggestion to heart!

The first committee I joined was the Communications Committee. I felt that if I was going to be giving my time as a volunteer, then I wanted it to benefit me in some real and tangible ways. At the time, I was an individual contributor to a sales organization; I saw this as an opportunity to diversify my skills. While it’s never fun to be the person that doesn’t know what they’re doing, after a short learning curve, I found myself editing articles, publishing through WordPress, creating graphics in Canva, and sending newsletters through MailChimp. These were all things I had never done before. On top of all that, I was endorsed by my mentor Khali Henderson to co-chair the committee.

While possessing new skills are valuable on their own, the real benefits I received from learning them were so much more significant. Professionally, I found myself taking on new and challenging roles to advance my career. Personally, I developed a circle of close friends who understood my career and shared my professional ambitions. These friends also served as examples to me. For instance, it’s possible to build both a career and a family at the same time. Returning to work after having my first child was one of the most challenging internal struggles I’ve had to overcome in life. However, having so many examples of women thriving in both arenas gave me confidence in my return to work. Now a couple of children and a cancer journey later, I don’t know where I’d be without these people.

I’ve had the great privilege of selling alongside some of the connections I’ve made through the ACW. A couple of years back, I raised my hand to interview and write about the winners of our ACW LEAD Awards, which recognized exceptional female leaders in the tech channel. Thanks to volunteering for that simple task, I forged relationships with some of the most admired women in the industry. Over the years, I can say some of the biggest deals I’ve ever closed have been with the connections I made while conducting those interviews.

Earlier this year, I joined the Digital Realty Partners and Alliances Organization. I interviewed for the job with three leaders who each took a keen interest in my long tenure with ACW. If I could use my own words to explain why that is, I’d say volunteering – what you do when you’re not getting paid – says a lot more about your character, integrity and discipline than anything on your resume could.

Contributing to the volunteer-led ACW organization has been the single best investment I’ve made in myself. I am forever grateful that I attended that first pre-Channel Partners Expo happy hour all those years ago. I am just one person, but it takes a team to uphold the mission of our founders. With the help of all the members of ACW, we can continue to create a space for women to advance their careers and take on leadership roles at the highest levels in the technology channel by providing education, community, advocacy and opportunities for personal growth.

Morgan Granfield is a high-energy contributor to the Digital Realty Partners and Alliances Organization, helping to create circles of influence to achieve digital transformation success. A believer that diversity creates an undeniable power to outperform the competition, Granfield is a fierce advocate for inclusion. She sits on Digital Realty’s Diversity and Inclusion Council and their Women’s Leadership Forum. Granfield is a 2017 ACT Award recipient, recognized for her outstanding contributions and volunteerism in Alliance of Channel Women’s Membership, Events and Communications committees. A certified yoga instructor and a Texas A&M Certified Master Gardener, she is a proponent of lifelong learning as the secret to a successful and fulfilling life.