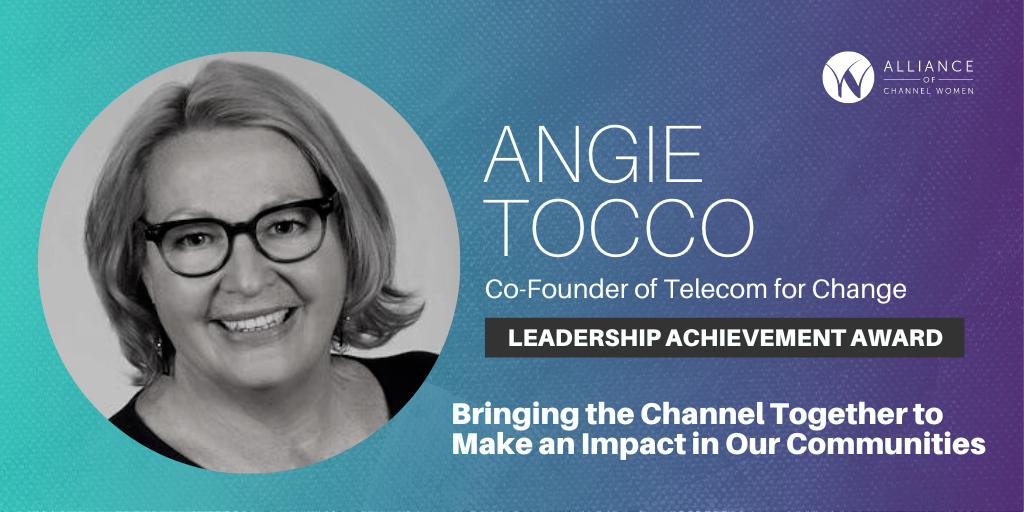 ORANGE, Calif., and Orlando – September 14, 2022 – Alliance of Channel Women, a not-for-profit organization dedicated to accelerating the growth of female channel leaders in technology, presented its inaugural ACW Leadership Achievement Award to Angie Tocco, Co-Founder and Past President of Telecom for Change. Since its inception, the nonprofit has brought the technology channel together to raise more than $1.25 million for grassroots community groups.

ACW presented the ACW Leadership Achievement award during the ACWConnect Live! event themed “The Leader in You,” held on September 14, 2022, as part of the MSP Summit and Channel Partners Leadership Summit at the Caribe Royale Resort in Orlando.

“ACW is honoring Angie Tocco for her dedication and leadership in bringing the channel together to champion unsung local heroes and make a real impact in our communities,” said ACW President Cassie Jeppson, Director of North America Channel Programs, Lenovo. “What’s more, she led this effort while growing a top-performing telecom agency to a successful sale. Angie is an inspiring channel leader both in business and philanthropy. Her commitment to making the world a better place legacy worth recognizing and supporting.”

Tocco is a 35-year-veteran of the telecom industry and the co-founder of LanYap Networks, which was acquired in 2021 by UPSTACK, where she now serves as Partner and Managing Director. Before forming LanYap Networks in 2011, she served as Regional Sales Director at Mitel, Agency Manager at Inter-Tel Network Services and Telcom Director at G.E. Capital, among others. Tocco also is a member of the Women’s Business Enterprise National Council and a former board member of Gabriel’s Angels, which provides therapy dogs to at-risk children.

Tocco was among the first recipients of the ACW LEAD Award for Exceptional Female Channel Leaders in 2017. This year, she was honored by ACW for her leadership and vision in co-founding and leading Telecom for Change as its President until her retirement from the nonprofit in 2022.

Along with her business partner, Laura Dashney, Partner and Managing Director at UPSTACK, Tocco recognized an opportunity for technology suppliers and channel partners to work together to raise funds for grassroots charities that are often underfunded. That idea was realized in 2014 when the two women founded Telecom for Change, a 501(c)(3) nonprofit organization that leverages event-based fundraising to provide game-changing donations that go directly to causes rather than administrative costs.

“Angie co-founded Telecom for Change to support nonprofit organizations that are doing real work in their communities but may be overlooked by funders,” said Brad Dupee. He succeeds Tocco as President of Telecom for Change and serves as Head of Channel Development at Granite. “Since its beginnings, Telecom for Change has thrived under Angie’s leadership and vision. We owe her a debt of gratitude for seeing what’s possible when the channel comes together for good.”

Tocco continues to support Telecom for Change as a member of its Advisory Board and a lifetime Board Member.

About the Alliance of Channel Women

Founded in 2010, the Alliance of Channel Women is a not-for-profit organization for women in the indirect sales channel of the telecom and IT industry. The Alliance of Channel Women brings us together to empower and advance women’s careers and leadership roles in the technology channel through education, community, advocacy and opportunities for personal growth. To learn more and to become a member, please visit www.allianceofchannelwomen.org.